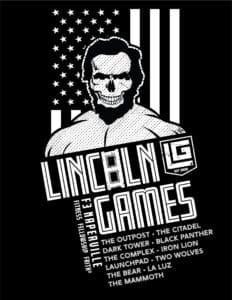 The numbers have been tallied and we are pleased report the results for Lincoln Games 2022.

Check out some sights and sounds on our Instagram profile here.

While the physical accomplishments were impressive, Lincoln Games represents much more for F3 Naperville. The week of competition helps accelerate our 2nd and 3rd F programs which align with Fellowship and Faith/Community respectively.

From a 2nd F perspective, the 21 teams were comprised of individuals who may not have known each other, so competing together for a week has forged bonds that did not previously exist. Many teams coordinated their workout schedules together, had points strategy sessions, and got together for meals and fellowship beverages.

From a 3rd F perspective, our region was able to raise more than $6,500 for local charities, including $3,565 for our F3 Naperville Foundation. Through the generosity of F3N PAX ‘Serena’ and his employer IntenGen Financial Partners, an additional $1,000 was committed to the Foundation in conjunction with the Lincoln Games.

Reinforcing the fact that F3 is “more than a workout,” pop-up challenges posted each day for extra points had PAX buying flowers for their spouse or someone important in their lives, which drew out some inspiring stories of what that person means to them. Another pop-up asked PAX to take a pie to the face from their kids, and some memorable laughs were heard. Other pop-ups had PAX chugging two beverages of their choice in less than 60 seconds and explaining how they got their F3 name, dumping ice water over their heads while impersonating their favorite pro wrestler and citing which chapter of the F3 Q-source they were going to read, or bench pressing a certain weight for 5 or 10 reps based on their size.

Below are the combined stats of the 398 F3 Naperville PAX that participated in Lincoln Games 2022:

But if you’ve read this far, you likely want to know the final scoreboard. Without further delay – below are our top scoring teams and individuals from the week of competition. As a reminder you can learn more about points could be scored here.


This week wouldn’t have been possible without the leadership of our First F Q Blues Clues. Not surprisingly, he raised the bar even higher for our third edition of Lincoln Games, and we have collective gratitude the energy and encouragement he brings to the program.